In 1960 two grassroots amateur racers named Bill Ames and Dewey Brohaugh collaborated to build a modified racer from their TR-3 race car. They started by fashioning a plaster plug that resembled a cross between a Lister Jag and “Birdcage” Maserati (so labeled because of the resemblance of the monocoque chassis to a typical birdcage). These cars were well known and popular at that time but were affordable only by a few wealthy racers.

Since Bill and Dewey knew little about fiberglass they contacted Jim Carter in Minneapolis (Minnesota, USA); at first Jim didn’t lunge for the opportunity, since Bill and Dewey at that time didn’t have the wherewithal to fund the project.

But Carter eventually concluded “What the hell” and built the mold for them, and the first few body kits. Bill and Dewey built and raced the first car, built on their Triumph TR-3 chassis. At last the first “Ambro” was born. Forty or fifty body kits followed; the finished cars were built on everything from a modified ’55 Chevy chassis to a VW Beetle pan. Bill and Dewey then sold the molds to Jerry Scrabeck. Scrabeck sold several more bodies, one shipped to the Rock of Gibraltar on the Iberian Peninsula. He eventually sold the molds to an unknown individual who inadvertently destroyed them when he attempted to make a body from them. The saga of the Dio could have ended right there.

Bill Bonadio Jr. had located car number one after it had traded hands several times in the early 1970s. Wanting it badly but unable to afford it, he kept track of it until it reached the hands of a friend of his. Bill’s friend thought that it was a real Birdcage Maserati because one of the previous owners referred to the car as his “Maser(ati)”. After discovering it was an Ambro, he began a long search to find Bill Ames. Ames was located in Elizabethtown, New York and was advised that his first car was located intact. You would’ve thought he just found his long-lost brother. Bill Ames wanted to buy the car back but was unable to afford his now-collectable vintage race car. So Ames began his search for one of his other cars and came across an original body that had been stashed away in a farmer’s barn in Minnesota for some 30-odd years. Ames thought he would fix the old shell and make a mold from it and market the kits again. But at his age, now in his 60s, he lacked the energy and finances to undertake such a project. Bill Bonadio Jr. had been keeping in touch with Ames, hoping to be a dealer. When Ames decided to not proceed with his plans, Bonadio tackled the project himself, with Ames becoming his dealer. Now renamed “The Dio,” Bonadio paid a royalty to Ames. After Bonadio built the mold he sent the original shell back to Ames, who completed a replica of his first car, using the original shell and an early Triumph chassis.

In January of 1990 the first car out of the new mold was built on a full-tube chassis using hand-built front control arms, a 4-link 9″ Ford live-axle in the rear with coilovers and disc stoppers on all four corners. The car has a basically-stock 302″ Ford small-block V8 outputting about 250 hp, a C4 automatic and a 3:50 Posi rear. It has run mid-12s in the quarter mile with street rubber and closed exhaust, clocking 0-60 in 4.5 seconds. With nitrous oxide the car has run 10.09s at 139 mph! Bonadio and his company Classic Antique Replicar Specialist (CARS) is offering the Dio-Ambro once again. You can build your Dio on your choice of several existing production-car chassis (for a sampling of your chassis choices, see the Jack Ashcraft line drawings on the chassis page) for as little five or six thousand dollars, or you can opt for a CARS custom-tube-chassis model and spend a total of from $10k to $20k. Several clubs have approved the cars for vintage and wheel-to-wheel racing. And of course the car makes a great solo car. The car can also be used as a street car but is appropriate only for sunny weather since it has no top. Bill Ames and Bill Bonadio had a great relationship until Ames was overcome from cancer and passed away. Bill Bonadio and his company now own all the rights to the Ambro name and are marketing this beautiful driving machine under the “Dio” logo.

The Type 61 boasts marvelous coachwork. But wait ’til you examine the lineup of available underpinnings. 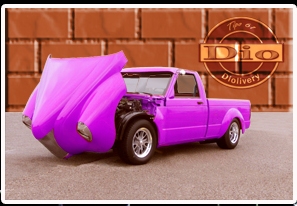